I awoke this morning early, following a restful and thankfully dreamless slumber.
Vowing to outstay my welcome in Alvor’s house no longer I determined to find
myself steady work at the neighbourhood saw-mill. I met Alvor’s wife properly
for the first time over a breakfast of stale apples and carrot (I won’t miss
the food here that’s for certain!) My first thought upon our meeting was that
she certainly was fair to look on, but her attitude soon turned that thought
around. Innocently I greeted her “Good morning!” I enquired about her thoughts
on the war, wanting to hear of it from a citizen. All was well until, just prior
to our conversation’s end she said. “I’m spoken for, you know. So don’t get any ideas.” 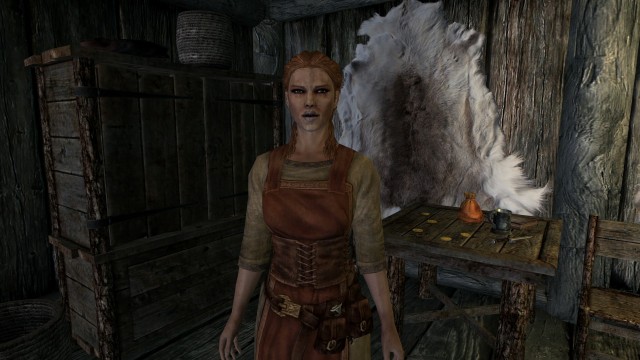 Alvor’s done well, could do with a face wipe however….

Given her guarded demeanour this offense certainly means the end of my stay, I
have never in my life been a burden to anyone and shall not begin now in a land
that is not my own. Finishing my mean breakfast I promptly left, hoping for
friendlier conversation elsewhere.

It was a pleasant morning, the sun was shining and the birds were singing,
the perfect day to start my new job. I headed over to the saw mill and met the
biggest Nord yet. Blonde with a large handlebar moustache of the same hue, he
was at least 6 feet tall and had arms the size of the logs he was cutting. Talking
to him I found his name was Hod and that he owns the mill along with his wife
Gerdur. More importantly I found that he would pay me for any firewood I brought
him, I had all but secured a steady income! 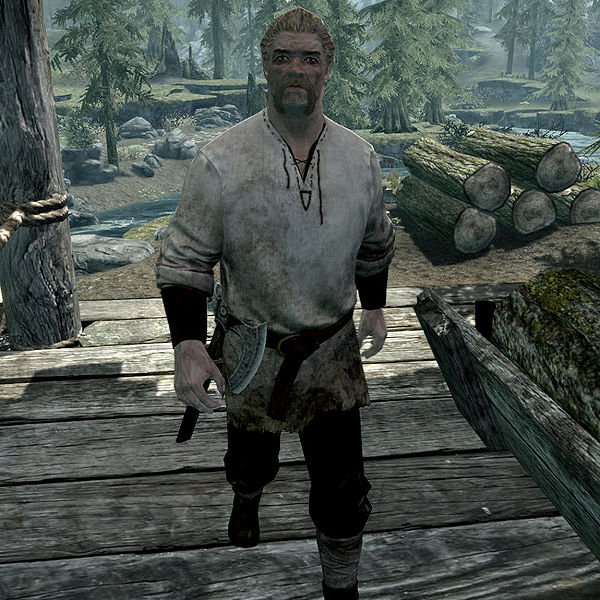 The only thing manlier than a Nordic blacksmith, a Nordic lumberjack.

I still needed, however, to attain the tools necessary. I saw the wood-chopping
station, if that’s what it may be called, on the way to see Hod. Walking over
to it I saw an axe lying on the floor, had someone left it there? Should I simply
take it? In the end I decided to use it and then drop it again afterwards, if it
was still there tomorrow morning then it’s mine. With the equipment sorted I
got down to work, pulling a log off the pile and placing it on a stump that,
judging by the marks in it, was clearly the chopping platform.

I have never split logs before, hunting being my trade, but by the Nine I now
know where Hod got those arms from. I was tired from my border-crossing ordeal
anyway but even had I not been so the labour would still be most strenuous.
The axe was fairly heavy on the first stroke, being crafted from dense iron with a
thick-timbered staff, but by the twentieth my arms felt as though they were
like to drop off at any moment.

Imperials aren’t built for this!

A couple of hours later and it was midday, high time for a break or so my arms
thought and I was happy to concur. With a little strain I carried the firewood
over to Hod and, to my delight, he gave me 100 septims. It felt good to receive
my first salary in Skyrim and I decided to spend it on ingredients so that I could
cook a decent meal and forgo the usual supper of stale apples. I headed over to
the Sleeping Giant for a spot of lunch and to buy ingredients for supper, greeting
the town drunk and his two child companions (don’t ask). Inside the bard was
singing a heroic sounding song with rather violent lyrics, I’ve heard better
but I’ve certainly heard worse.

Orgnar seemed to be in a good mood today, at least his tone of voice had not
changed a bit since last meeting, he gruffly asked me what I wanted. I bought
from him a carrot, a cabbage, a venison steak and a couple of salmon steaks,
enough I thought for a day or so. I also ordered some cooked food and enjoyed
a succulent venison steak while listening to the bard play his flute, again
rather well. After finishing my dinner I decided to head back to work for a
few hours and, after quaffing  an ale and bidding farewell to Orgnar (to
which I received no response), I headed back to the saw mill.

A few hours of exceedingly strenuous labour later and I was just about ready to
drop and decided to call it a day. Trading in my firewood for another 150 septims
I sloped off back to Alvor’s, a hearty supper and an early night calling me
home. Inside I was greeted by Sigrid, she seemed to have forgotten about our
prior conversation, I’m not sure whether that’s good or bad and at that moment
nor did I care. After briefly consulting Sigrid I added my venison steak to the
cooking pot over the fire and tried to recall the recipe for venison stew. I
had a potato and a leek, both taken from Alvor’s table, but I had forgotten
the salt! Without salt piles I couldn’t cook practically anything so, rather
than ask Sigrid for some, I had to head back out to the Sleeping Giant and buy
some.

After buying Orgnar’s entire stock of three salt piles and surmising that salt
must be scarce in Skyrim, I could finally cook my supper. Very well I could too
for I was starving at this point! I added the salt to the stew and stirred it,
my stomach rumbling deafeningly all the while. I am no expert but my cooking
skills aren’t bad, particularly when cooking game and the venison stew I cooked
up tasted simply excellent. My hunger satisfied I downed another tankard of ale
(I have drank a lot since coming to Skyrim) and decided to go to bed.

I plan to explore the valley south tomorrow, after purchasing some rudimentary
armour with my wood-splitting money. The beauty of this country calls to me and
the sooner I can get my hands on a bow and arrows the better. Then I can
leave the back-breaking lumber business to behemoths like Hod.