I awoke late this morning from a troubled sleep. Nightmarish figures crowded
my dreams, visions of the headsman, dark memories and death. More than once in
the night I rose, beads of sweat trickling from my brow. I was a stranger in
a strange land and thus far had received precious little welcome. The image
that haunted my unconscious hours the most was that of Helgen, when the man
before me was called and his life torn away from him with one blow of the
headsman’s axe. His headless corpse being kicked carelessly away by the captain
provoked strong emotions, my stomach roiled as anger and other raw feelings
threatened to boil over. Such a callous act even in war, such is the hate
shared by the opposing sides. I admit I know little of the war, coming here as
hastily as I did, but what I did know led me to underestimate the severity of
unrest.

When I did rise it was ten o clock, practically midday for me. Alvor and Hadvar
were at table, still talking about the events of yesterday. I sat down and sated
my hunger with a couple of apples when Alvor turned his attention to me. He
offered me food, shelter and a belted tunic to wear instead of the rags I escaped
in. Hadvar’s kindness must be hereditary because these are two of the kindest
men I have ever met. To take in a perfect stranger, an ex-prisoner (however
wrongly accused), who is also a foreigner. Such kindness is almost too much
for me to bear and I assured him that I shall not outstay my welcome.

“So….what are your plans for the day”

This generosity can not go unrewarded so I offered to help him out at the forge.
I am no blacksmith, hunting is my trade, but I have skills with leather and
hide. He accepted my offer and we drank a tankard of ale to toast the deal (a
little early for it but after what I’ve been through I think I need it!) Soon
after the door opened and a little girl ran in, Alvor’s daughter Dorthe. She
tells me that she is “not supposed to talk to strangers, but that I seem ok.”
Very cute indeed. Apparently he has a wife too, but I have yet to meet her.

After breaking my fast and sitting around talking to Dorthe and Alvor for a while
I decided to do some work and headed outside to the forge. Riverwood by night
was dark and mysterious, by day it was glorious. A simple village nestled
between two magnificent mountains, with a fast flowing river running alongside.
The village itself is tiny, no more than a handful of wooden buildings with
a sawmill beside the river, but the view is all the majesty one needs.

If there is anything more manly than a Nord Blacksmith, I have yet to see it.

After admiring the view for a little while and deciding to explore the valley
once I am suitably equipped, I walked over to Alvor’s forge. After watching
Alvor work away at his forge I interrupted and asked him if he needed any help,
he accepted and for the next few hours taught me how to smith some basic
weapons and armour. Thankfully he started me off with the basics and I crafted
a rather crude looking iron dagger at the forge, then tempering the weapon at
the grindstone. With a little help from Alvor I managed to craft a serviceable
blade and a fine hide helmet (if I say so myself).

I do my best in Alvor’s shadow…

By the end of our crafting session the day was nearly at an end and slaving
over a hot forge works up a thirst, I decided to head to the local inn for a
tankard of ale and something to eat. I thought about asking Alvor to join me
but he had already gone, maybe next time then. 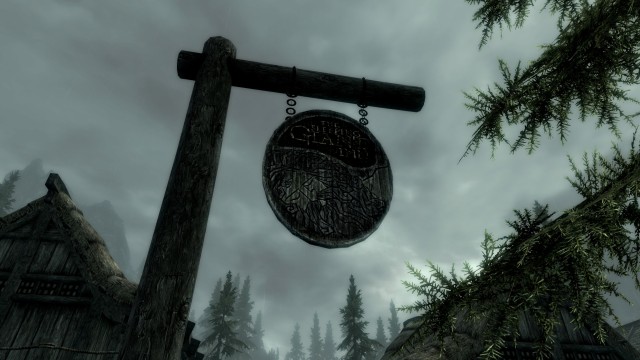 A welcome sight after a hard days scraping

The Sleeping Giant as the inn is so named, was not difficult to find and upon entering I felt the heat radiating
from a large central fire. It is a welcoming place, I thought, as I walked up
to the bar to quench my thirst. The man behind the bar, a fearsome looking Nord
by the name of Orgnar showed me his wares and I soon realised that food is
expensive in Skyrim! I don’t know if it is some sort of tax they add on for
foreigners but Orgnar, from his gruff speech and unshakeable manner, does not
seem the type to give out discounts. Bearing this in mind I settled for a tankard
of ale and decided to see what’s on the table tonight at Alvor’s place.

Ah back in the day when it wasn’t suspect for a drunk to hang around with two small children!

I seem to have landed on my feet here, I have a place to stay and food to eat.
I can’t quite get the feeling that I am close to outstaying my welcome at Alvor’s
place. I get the feeling that this is certainly supposed to be a short term residence
and, starting from tomorrow, I will try to secure a livelihood and alternative
lodgings. I wonder if the saw mill next door are taking on…