I froze, this did not seem real. My mind knew what I had to do but my body
would not obey. A sharp prod in the back from an Imperial guardsman sent me
forth and a kick in the back from the captain put my head on the block. I
looked up at what I thought was to be my last sight in this life, the grim
figure of the executioner standing over me, his black cowl masking his features.
I grimaced at the sight of the axe and began to tremor uncontrollably, closing
my eyes, waiting for the axe to fall… 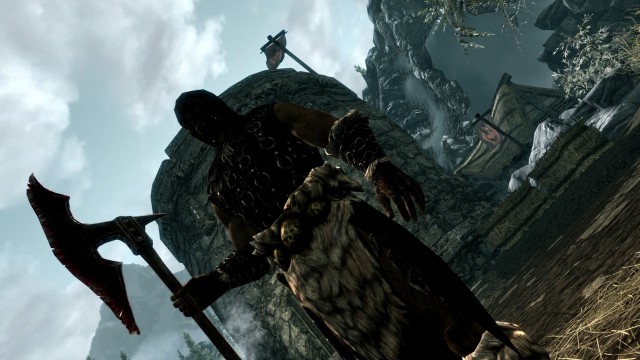 But it did not! I dared not open my eyes but could hear the chaos erupt around
me. It began with the singing of an arrow followed by the shriek of its victim
and before long the cacophony of battle filled my ears. I opened my eyes, the
headsman was gone. Looking down I saw his corpse sprawled out on the ground
an arrow lodged in his throat. It was difficult to sympathise with my would-be
executioner and, besides, I had no time to do so. Chaos reigned around me,
Nordic soldiers clad in fur and chainmail swept down upon my captors, raining
death down on their heads with arrow and steel both.

I panicked, for a moment it seemed as though I had been saved from the block
only to be ran through by an angry Nord. “You, prisoner, over here!” I heard
someone shout. It was the reluctant Imperial with the list from earlier, now
crouching in a corner with his sword drawn. He beckoned me over furiously,
promising me a way out of this mess. I had doubts however, should I trust one
of my former captors, no matter how reluctant he may have been?

An arrow flying closely past my head banished the thought and I sprinted
across the street to join him. He told me his name was Hadvar and that I should
stick close to him if I want to survive. He was the one with the sword and
armour so I did. The town was largely in flames now as we wended our way around
collapsed houses and grisly corpses. Thankfully we did not meet anyone and soon
we were out of the town through a postern door and onto a country road.

We stopped to get our breath back, the adrenaline still pumping through my
veins. Hadvar told me that he was heading to Riverwood his hometown and that I
should probably do the same. I had no clothes but the threadbare rags on my
back, I was hungry, cold, tired and was still in shock at the days events. So
this sounded like a good idea.

“I’m glad you decided to come with me.” He said as we walked down the country
road, the skies darkening above. He may have been reading out my name for
execution a short time ago but since then Hadvar had saved my life and was my
only chance of finding shelter for the night. His words touched me and I felt
my mood lift slightly. We turned a corner and the view that met me was tremendous.
It was almost full dark but the colossal black shapes of the mountains loomed
over us, making me feel but an insect. I suppose I had best get used to the
sight of mountains as Skyrim is littered with them, but the first is a sight
to behold. Hadvar stopped halfway down the hill, pointing to the mountain he
said. “See that ruin up there, Bleak Falls Barrow.” I looked to where he was
pointing. “When I was a boy that place always used to give me nightmares, Draugr
climbing down the mountain to climb through my window at night.” He looked
pensive. Looking at the mysterious ruin I decided then and there, that I would
never set foot in it or near it. I don’t know what Draugr are, nor do I
particularly want to know, but eerie ruins and dark dungeons are not for me!

I wonder how many ‘adventurers’ found their end there?

We carried on down the road a little when Hadvar stopped again. If I was tired
and hungry before by then I was half-starved and ready to drop, but I stopped
to see what he wanted. There were three standing stones at the end of the road
Hadvar tells me they are three of many ancient stones and that they’ll imbue
powers on those that pray there. Now I am not a particularly religious person,
but I decided to pray at the Warrior Stone as I’d need all the strength I can
get after the days events. I felt a warm glow around me as I did so, but no
solid evidence that it had affected me. Feeling still sceptical I carried on,
Hadvar at my side. 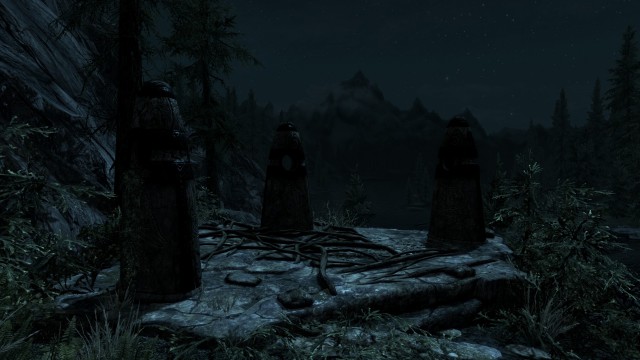 Can’t hurt to try…can it?

A little while later we came upon the dark outline of a village wall, I was so
glad to see civilisation that my pace quickened, despite my fatigue and Hadvar
did the same. Passing under the bridge He entered the first house on the
left, beckoning me inside after him. The feeling of warmth and the odour of
food that greeted me was heavenly. Hadvar embraced a stout Nord with the arms
of a blacksmith, from their greetings I found his name was Alvor and he was
Hadvar’s uncle. I greeted him wearily and, to my delight, he offered me food and
shelter. Sitting down to eat I let Hadvar tell of our exploits. 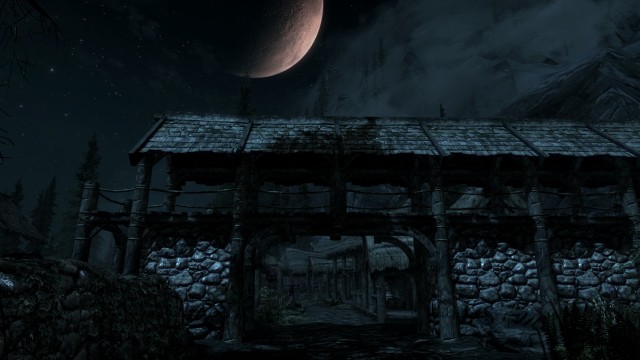 “Dangerous but beautiful” just about sums up Skyrim thus far.

His uncle was shocked and again offered us his hospitality. He was a kind man
I thought, as I crawled into the marital bed, to offer a stranger a bed for
the night.